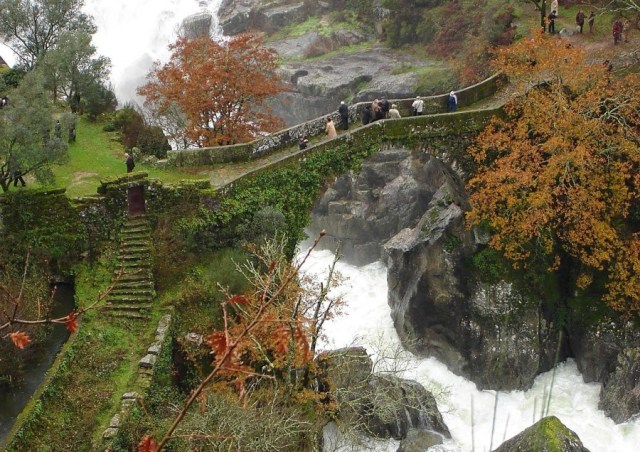 Misarela Bridge (the devil’s bridge) is located on the Rabagão river, about 1 kilometer from its mouth in the river Cávado, in the parish of Ruivães, municipality of Vieira do Minho, district of Braga, Portugal. It connects the parishes of Ruivães to the one of Ferral, in the county of Montalegre. It is implanted in the bottom of a steep gorge, based on the cliffs and with some altitude in relation to the bed of the river, being supported by a single arc with about 13 meters of span. It was erected in the Middle Ages and rebuilt in the early 19th century.

According to local legend, this bridge was built by the Devil himself: There was a bad man in the lands of the Além Douro, whom the justice fiercely persecuted for various crimes and who always escaped, as he was aware of the hiding places provided by nature. But he was pressed very closely, and one day he went into the hinterland, and suddenly he was suddenly found on the edge of a torrential stream, in an alpine and ghastly place, by the cliffs of the cliffs, and by the roar of the waters that lay there in furious catadupa.